Recently I was troubleshooting a case on Database Replication – Link has Failed between the CAS and one of the Primary Sites. 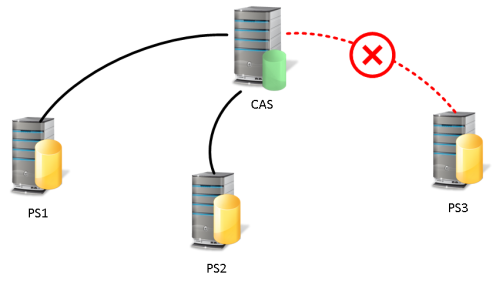 Problem: The main issue is with the Data Replication Service (DRS). It was found out that the Primary Site’s Database Server is running low on storage. However after increasing the database storage the link between the CAS and Primary site remained broken.

Findings and Resolution:  There was a drive issue on Primary Site’s database site system which caused replication to break.

Symptoms: It was reported that applications deployed to Windows 10 machines are not coming down in Software Center and only the machines under the Primary Site (PS3) are the ones affected.

During investigation: When checked, it was confirmed that package contents are not getting distributed to all Distribution Points (DP) under the Primary Site (PS3).

Resolution 1: Worked with Server and Database team to increase the storage for the database.

Further investigation and actions: CAS site is confirmed active and Primary Site is in replication maintenance.

The following query on was run against the Primary Site’s database server:

but did not return any output.

We then ran another query:

it returned the following:

From the SCCM console, the Link State was Link Initializing

Next step was to restart the sms execuitve and sms component services in Primary Site (PS3) server after the service restart, we were getting vlogs from PS3 database which corresponds to same status as what was seen in the console for the two replication groups below:

We did the same in the CAS database server, there were no cab files or dumps SQL tables for the Init request in the rcm.box.

The final step was to restart the SQL services on the CAS and PS3 the databases. After the restart it took some time to get the PS3 link Active. After running a query we got the current site status:  ReplicationActive SMS_REPLICATION_CONFIGURATION_MONITOR

Hope this post helps someone who’s encountering the same problem.

Have a nice day!